Greenfingers Sweep Up at BALI Awards

We have received national recognition in the form of an award from the British Association of Landscape Industries (BALI). Greenfingers was named as winner of the ‘Grounds Maintenance – Free Public Access’ category for our work at Cae Glas Park in Oswestry – a site that we both maintain and fully manage on behalf of Oswestry Council. We will receive the award at the official ceremony being held in London on Friday 7th December 2018. It is the first time that we have received recognition at the BALI awards – an annual competition that is now the largest landscaping awards scheme in Europe.

Our work at Cae Glas Park involves having a dedicated team on-site at the seven-acre site, managing its opening and closure every day and maintaining both the large areas of open space and its ‘Sports Village’, which comprises a bowling green, mini golf and children’s play area.

The park, which is known locally for its Memorial Gates and large areas of spring and summer bedding displays, hosts live music, sponsored walks, fun days and a wide range of sporting events throughout the year, all requiring the grounds and dedicated areas to be maintained to a high standard.

The BALI award marks the second time within the space of 12 months that our work at Cae Glas Park has received national recognition. Last October, the Park’s floral displays won a special memorial trophy at the Heart of England in Bloom competition, resulting in Oswestry being put forward to compete in the 2018 Britain in Bloom final.

“It’s always nice to receive recognition but to win an award for our work at Cae Glas Park is particularly special as our team are so heavily involved with the park and its day to day running.

The team at Cae Glas Park work tirelessly to maintain and look after the park, making it a safe and welcoming environment. Being located in the heart of Oswestry town centre, Cae Glas forms a central part of the local community, and we’re proud to be able to help provide a place of beauty and fun for the town’s residents.”

If you would like more information on how we can provide our award winning grounds maintenance to your sites, get in touch. 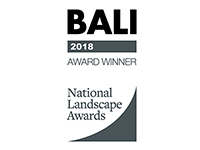